Surmounted by a large metal cross, Punta Sofia (1939 m) is the Corno’s northernmost peak; the other two summits, Corno alle Scale (1944 m) and Punta Giorgina (1927 m), can be easily reached following the ridgeline. Towards the east, the mountainside is very steep, featuring the distinctive sandstone strata (the Corno’s so-called “steps”), which are intersected almost perpendicularly by the narrow cracks that descend along the steepest slopes. These cracks are the first elements of the hydrographic network, which channels the water flows at the foot of the Corno towards the valley floor, completing, in no time at all, a drop of almost 1000 m from the mountaintop to Segavecchia. In summer, the trail leading to the Corno’s summit across the Balzi dell’Ora enables one to admire the splendid blooms of rare rupicolous species that, in contrast, are particularly concentrated in this area. Among the many species, two that are notable for their size are alpine columbine and purple gentian, whereas smaller plants include the alpine aster, alpine pasque flower and bear’s ear. 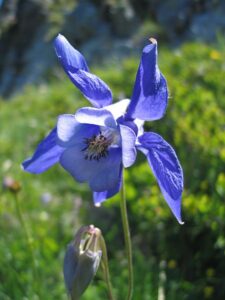