Buca delle Candele
Near the so-called “Palestrina”, ancient quarry head probably dating back to the Roman period, on the steep walls of a swallow hole situated inside a woodland area, the runoff has produced evident and spectacular vertical furrows called “candle-like erosions”.

Buca del Budriolo
It is a deep blind valley developing at direct contact with very inclined chalky strata; at the bottom, the swallow hole access to Calindri Cave (another protected cave) opens. While the southern slope is gentle, with cultivated fields and a small vineyard, the opposite slope is very steep. The outcrops are colonized by the characteristic pioneer vegetation consisting of moss, lichens, and small succulent plants; in summer, the golden helychrisum and broom bloom. The bare areas alternate with a low shrub formation of Downy oaks, where the evergreen phyllirea also appears.

Buca dell’Inferno
Several swallow holes, from where you can access small cavities like Coralupi Cave, open on the slopes of the doline, almost entirely covered with a cool woodland. In spring, among the wonderful undergrowth flowers, the scilla stands out; during the summer, in very limited stations, the Turk’s cap lily and Orange Lily bloom.

Large doline in which swallow hole access to several cavities open. The largest cavity (Grotta Novella) is used as a subterranean laboratory and is characterized by imposing limestone calcite blades. The cool and wet microclimate near the swallow holes favors the presence of Moss (Minimum spp), Ferns (Polypodium vulgare), Maidenhair Spleenwort (Asplenium trichomanes). The presence of Delphinium fissum, extremely rare above all at low altitudes, is worth a mention. The northern slope, once characterized by cultivated fields, is covered today with a thick shrub formation extending in the woodland covering the rest of the large doline.

Buca di Ronzano
In the more gentle areas of the blind valley there are several houses surrounded by large evergreen formations, vineyards, fruit tree rows, and meadows. On the chalky ridges closing the valley a thin undergrowth develops, interrupted in some stretches by the outcrops: here Downy Oaks, Manna Ashes, and Wild Pear often acquire a shrubby and twisted formation; the sunny exposure of this slope enriches the vegetation with several Mediterranean species (Sageleaf Rockrose, Phillyrea, ilex tree). 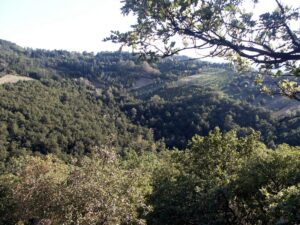 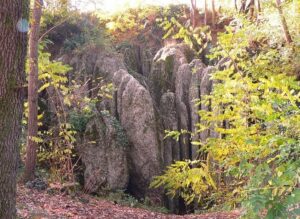 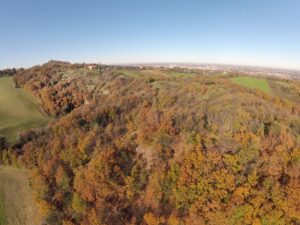 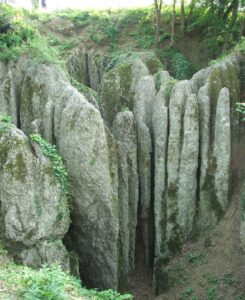