Madonna dei Boschi Oratory
Small seventeenth-century oratory object of ancient popular devotion, recently restored, located inside the forest near the homonymous street.
The cleaning of the vegetation that had gradually invaded the area in front made it possible to bring to light a huge block of plaster, shaped to be used as a rustic seat and restored value to the beautiful centuries-old oak that borders this unusual and suggestive “churchyard”.

Croara Church
In the shade of majestic pines stands the church of La Croara (with a nineteenth-century appearance). It was part of the ancient convent of Santa Cecilia on which the surrounding farms and oratories depended; today the small Renaissance cloister attached to the church remains. From the square, there is a beautiful view of Bologna and the plain.

Pizzocalvo
At the confluence of the Zena with the Idice, on a small hillock, an avenue of cypresses leads to the small church of Santa Maria Assunta, which already existed in the 12th century. The few scattered houses and the church are what remains of Pizzocalvo, an important community until the end of the 18th century.

Villa Abbadia
On the large terraces of the Idice valley floor, in the imposing architecture of Villa Abbadia, the ancient Abbey of San Michele can still be recognized. Belonging to the Camaldolese monks and then to the pleasure-seekers, it passed to the family of Carlo Berti Pichat, the first mayor of San Lazzaro, who transformed it into a villa in the early 1800s, adding the massive clock tower.

S. Andrea
The simple church of S. Andrea stands isolated on the gentle northern slope of Monte Arligo, mentioned in documents from the 11th century and rebuilt between the end of the 18th century and the beginning of the 19th century. Inside are the remains of Blessed Lucia da Settefonti. Nearby is the neo-Gothic Villa Massei, surrounded by a large park.

Pieve di Pastino
The ancient parish church stood in an extremely panoramic point, from which it dominates the plain. The name, according to a legend, derives from a previous pagan temple dedicated to Pan. Today only the simple oratory remains of the noble past; blocks of selenite and decorative elements are inserted in the walls of the nearby sixteenth-century rural building, built using materials from the old parish church.

Settefonti
The unmistakable profile of the old bell tower emerges from the dense bush on the top of the Settefonti hill. It is part of the remarkable ruins, restored by the Park, of the seventeenth-century parish of S. Maria, located in the center of a fortified medieval village, of which traces of the walls remain. At the base of the hill, at the beginning of Via Medali, there is the small historic cemetery and an area equipped for parking.

San Pietro di Ozzano
The charming village still looks very similar to the one it had in the sixteenth-century drawings. It consists of a massive 11th-century tower and a few houses around the church, which preserves a Romanesque capital from the Pieve di Pastino inside. Near the tower, archaeological excavations have brought to light the remains of the medieval settlement and the original layout of the road network. 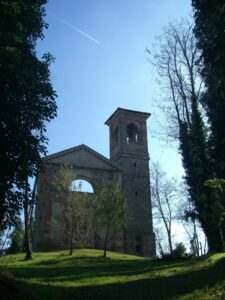